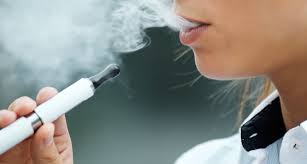 Oxford Dictionaries Word of the Year for 2014 was “vape.” It means “to inhale and exhale the vapor produced by an electronic cigarette or similar device.”

Electronic cigarettes (e-cigarettes or vapors) are plugged as a tobacco alternative. In 2014 we actually saw a rise in the use of vapors in people in their 20’s. This is a population that may have never picked up a cigarette in their life but now are smoking e-cigs. This is largely due to marketing to the younger crowd. With vapors coming in over 200 different flavors, it is often like going into a candy store, with flavors such as Apple Pie, Chocolate and Bubblegum. Most consumers wrongly assume e-cigarettes are less hazardous to their health than traditional cigarettes, however, since vapors are so new, research has not been  thoroughly completed and the risks are still largely unknown.

So, how do e-cigarettes compare to traditional smoking when it comes to cosmetic surgery?

It’s no secret that cigarettes have no place in a healthy, active lifestyle. But did you know that smoking also negatively impacts plastic surgery results? I advise my patients to stop smoking at least six weeks before and after any surgical procedure. It’s so important to me that I will nicotine test my patient’s right before surgery.

For those looking to quit smoking before cosmetic surgery, electronic cigarettes may seem like the perfect tool. But don’t trade your cigarettes for vaping just yet.

Although e-cigarettes do not contain tobacco or produce cigarette smoke, they do use a liquid (e-liquid) that contains nicotine, which is inhaled in the form of an aerosol. You can purchase cartridges in varying amounts of nicotine.  In addition to nicotine, e-liquids usually contain propylene glycol, vegetable glycerin, and flavorings. Because e-cigarettes are largely unregulated by the FDA, it is actually unknown what exactly is in them.  They all seem to have varying amounts of heavy metals.  Some research recently released states that some vapor brands may actually have toxic levels of heavy metals. Thomas J. Glynn, the former director at the American Cancer Society, stated in December 2014,  “When a consumer goes into the store right now to purchase an e-cigarette, they’re basically buying a lottery ticket. They don’t know what exactly it is they’re buying. They could be buying one of the ones in a Japanese study that has 10 times the amount of formaldehyde in a normal cigarette. They could be buying a product that might help them get off cigarettes forever, and not be that harmful.” I don’t know about you, but this is scary information and I’m not willing to play Russian Roulette and just “hope” that what I am buying is safe for me.

Because nicotine can affect your body’s ability to heal, increase risk of blood clots, and react with medications, I believe that e-cigarettes are just as harmful as traditional cigarettes when it comes to cosmetic surgery. I have actually changed my smoking policy to include e-cigarettes which you can find here.

I place patient care and safety at the top of my priority list and will not perform surgery on patients who smoke cigarettes, vape with e-cigarettes, or use products that contain nicotine (including gum and patches). If you’ve been considering cosmetic surgery, you’ll want to have great results; therefore I urge you to commit to a plan to stop smoking before your plastic surgery procedure.

So to answer the answer question are E-Cigarettes safe? The jury is still out but my answer is going to be no.